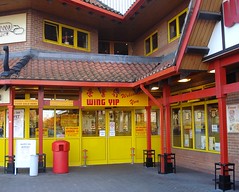 A large Chinese supermarket on the Purley Way in Croydon, near Waddon Station.

It mostly sells frozen and prepared ingredients, sauces, drinks, sweets and snacks, with a limited range of fresh vegetables and fish, and some packaged meals. All the meat is frozen. There is also lots of crockery and cutlery, and things from other South-East Asian cuisines.

In the same building there are also several other businesses either selling South-East Asian food or aimed at South-East Asian customers: at least one each of Chinese, Vietnamese, and Japanese restaurants, a Chinese bakery, a Chinese medicine practitioner, and incongruously a hairdresser.