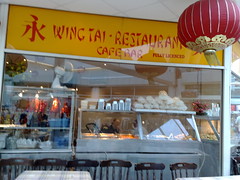 Wing Tai Restaurant was a Chinese restaurant in the Aylesham Centre in Peckham. It has now closed.

Chinese restaurant in the Aylesham Centre in Peckham. Unlike the associated supermarket, the entrance is in the shopping centre itself, rather than on the road outside. There doesn't appear to be any public access between the two.

secretlondon went here one Saturday afternoon in October 2008. I had the all you can eat buffet (£6.50) photo and a pot of Chinese tea (£1.20). They do 'part' buffets too - for example you can have any three dishes for less. You can take away, and they also do English breakfasts, jacket potatoes and other non-Chinese food to order such as chicken pie.

The food was not just the standard Chinese fare as you might expect from an establishment run by a supermarket. They did quite a bit of seafood as well as one dish with chicken, pork, duck and beef. There were three types of rice and spicy noodles.

There was a radio playing. They are licenced and only take cash. The tables outside are still in the shopping centre so you couldn't smoke at them.

Accessibility: There were no steps to enter but I couldn't see an obvious toilet.