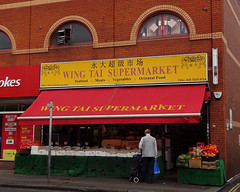 Small Chinese supermarket in Peckham, just off Rye Lane. The entrance is on Hanover Park, to the side of the Aylesham Centre.

It's fairly well-stocked despite its small size, with dried ingredients including tea tree mushrooms and white fungus, packaged ingredients such as nian gao (New Year rice cake), and fresh greens including morning glory/ong choy. The fridges hold dried, fresh, and fried tofu. There are freezers too, with frozen dim sum as well as sliced meat and meat/fish balls for hotpot. At the front is a fresh fish counter.

There used to be an associated restaurant in the same building, with the entrance in the Aylesham Centre, but this has now closed. There also used to be other branches of the supermarket in Camberwell, in Croydon, and in Brixton, but the Camberwell one closed by early 2013, the Croydon one closed around October 2017, and we're not sure if the Brixton one is still open.

Accessibility: Not sure if there's a step to get in. The aisles are very narrow.