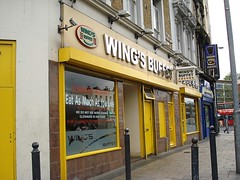 Wing's Buffet was an all-you-can-eat Chinese buffet near Westferry DLR in Poplar. According to Google Street View, it closed down by April 2017 and was replaced by a Chinese restaurant called New Beijing.

It changed hands in 2012; some of the information below may therefore be out of date.

The buffet prices vary; it's more expensive in the evenings and at weekends, but cheaper prices are charged for children under the height of 140cm. The AYCE offer includes desserts. There is notionally a surcharge for overfilling takeaway containers, but the criterion seems to be "if you can get the lid on it's not overfull".

Bradders's verdict (prior to the 2012 change of management): I've very regularly used Wing's as a takeaway, and also dined in several times. The food is invariably excellent, with the cashew nut chicken being particularly notable. I've taken several serious foodies into here; they may raise their eyebrows on the way in at the rather greasy-spoon ambience, but one mouthful and they've all become instant converts!