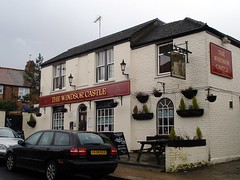 Small single-room locals' pub in East Finchley. It's part of the McMullen estate, but is independently managed.

Kake visited on a Tuesday afternoon in March 2009. I was the only customer apart from an older gentleman who came in for a single swiftly-drunk pint during my visit. Three of the six handpumps were on, offering McMullen AK (£1.45/half), McMullen County, and Sweet Chariot English Bitter.

The decor is very traditional; everything's upholstered, even the small corner shelf which holds a standard lamp. There's a small telly mounted by the door, facing the bar; this was showing cricket with the sound off during my visit. There's also a larger flatscreen, technically in a side room but visible from most of the pub. The side room also has a fruit machine, though not a noisy one.

Background music during my visit was provided by a Coldplay album; this may not be the normal state of affairs. There were a few board games on the side of the bar — draughts, Connect 4, that sort of thing.

Accessibility: No step to get in, and the ladies' doubles as an accessible loo.