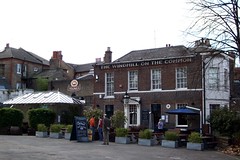 Young's pub in Clapham, actually located on Clapham Common itself. It's also a hotel (with 29 en-suite air-conditioned rooms, according to their website).

We've been here a few times now, most recently in August 2019. When bob and friends visited on a Thursday evening in October 2008, the guest ale was Tribute (£3.20/pint) and other beers available were Young's Ordinary (£2.95/pint) and Bombardier. The wine list is good, and a pinot noir tried by Ewan in December 2008 was very decent and around £6.25 for a large 250ml glass. In June 2019, the ales were Young's Special, Young's London Original (£4.75/pint), and St Austell Proper Job (£5.10/pint); they also had Rosie's Pig strawberry cider on handpump.

In October 2008 a bar menu was available, with pizzas, sandwiches, and some sharing platters, as well as a relatively standard normal pub food menu.

When Ewan visited for lunch on the Sunday before Christmas 2008, the place was fairly full by 12:30pm — they'd opened up several rooms for dining. They wanted a deposit for the special Christmas menu, but the regular menu was available to us, and included several different roasts, as well as pub basics. The vegetarian roast involved artichokes and mushrooms in puff pastry, and was tasty (though the chopped olives in it didn't really add to the flavour), coming with roast potatoes, Yorkshire pudding and vegetables with gravy. Service was prompt and friendly.

According to the 2009 Good Beer Guide, quiz night is Sunday and there's a real open fire and a heated, covered smoking area.