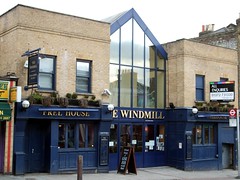 According to the South-East London CAMRA mailing list, the Windmill's last day of trading was Sunday 5 January 2014.

According to the 2009 Good Beer Guide, this is a former Wetherspoons which is now a proper free house; also, it doesn't do food, and there's a small courtyard at the rear for smokers.

A commenter (May 2011) tells us that the pub does karaoke and there's a beer garden; we're not sure if this just refers to the courtyard though.