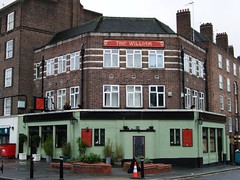 The William was a pub in Borough near Elephant & Castle Station. It has now closed.

According to Google Street View, by June 2014 it was a shisha/dessert bar called Buddha Lounge, and by November 2015 this had become Le K-Vo Lounge. As of mid-2016 it's occupied by a naked restaurant pop-up called Bunyadi.

A pub in Borough near Elephant & Castle Station, serving Vietnamese food. It also does online ordering via Hungry House.

It is an old estate pub in the Rockingham Estate which has been taken over by a Vietnamese family. They also do takeaway and delivery, possibly under a number of different names (different parts of the interweb seem to think the food part of the business is called Pacific Kitchen, Saigon Rose, or Mint Restobar). secretlondon spoke to them about it and they say the only correct name is Pacific Kitchen. Older menus to eat in say "Saigon Restaurant and Bar" which the owner told me is incorrect.

bob visited on a Monday in June 2008, and was the only customer. Guinness was £3.30, and was drinkable. They may sometimes have real ale; there was a Greene King IPA pump clip which was turned around on my visit. The food was quite good.

secretlondon visited in November 2008. She was the only person eating (or drinking) but half the pub was partitioned off for a marketing group. There were three handpumps with the clips turned round. They had a normal range of draught lagers and some wine and bottled cider. They also had bottled Vietnamese beer which the owner got for me - Huda Beer from the Hue Brewery photo.

I started with Vietnamese spring rolls photo (£2.50) which came with sauce and a plate of lettuce and fresh mint photo.

I then had Bo La Lot (grilled beef wrapped in Betel Leaves) for £7.50. It came with the same salad and some vermicelli photo. Not realising it came with noodles I got some egg fried rice (£1.90) photo. I then had Che Dau photo, black-eyed bean pudding (£3).

They seem to do a wider range of Vietnamese dishes than New Loong Kee Cafe or Hoa Viet. One that caught secretlondon's eye was Bo Nhung Dam (beef in vinegar and coconut juice). They sell that for £30 for two people. Beef with mixed seafood in vinegar with coconut juice was £50 for two. secretlondon has no idea if this is a special dish.

Accessibility: Toilets are down some stairs.