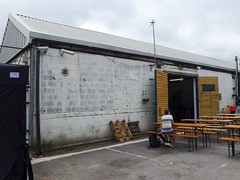 Brewery with associated bar in Walthamstow.

This microbrewery on an industrial estate is about halfway between Walthamstow Central Station and Wood Street Station, and isn't much to look at from the outside, but nevertheless offers a welcoming atmosphere. It's open on Friday nights and weekends, with seating inside and on trestle tables outside the front door. It can get busy on Saturday evenings, but usually there's plenty of space to sit.

The bar itself has four handpulls for ale brewed at the brewery, along with some keg and bottle offerings from other (generally London) small brewers. All is well kept, given it's hardly travelled very far, and the selection usually includes a dark beer as well as a bitter and pale ale. There is also a small selection of wines, ciders and spirits with mixers for those not drinking beer.

There's no food menu offered by the bar, but there's usually some kind of food van parked outside. This was a pizza truck on Ewan's July 2015 visit, offering vegetarian and meat options.

The toilets are on the same floor as the bar, with a couple nestled down amongst the brewing equipment and tanks.

The same industrial estate also has a gin bar (Mother's Ruin) and a fine showroom for bespoke neon signs which is worth a visit if you're there.