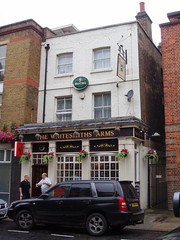 Now closed; was a locals' pub in Borough, located just behind Guy's Hospital.

The Feb/Mar 2013 issue of London Drinker magazine reported that it had closed and the freehold was for sale, and a comment on the LondonSE1 site suggested that it had been sold to a developer who planned to convert it to residential. Indeed, the Dec 2013/Jan 2014 London Drinker magazine reports that planning permission has been granted for conversion to a private house, and as of May 2015 the conversion is complete.

A locals' pub in Borough, located just behind Guy's Hospital.

Note: The Whitesmiths Arms closed for a refurb and change of management in mid-2011, and again in the latter half of 2012. We haven't visited since these changes of management, so our comments below may be out of date.

Inside, this is a fairly spacious two room pub, with plenty of long tables for seating. It's old-fashioned but in a good way, service is friendly, and even on Ewan's Friday evening visit in January 2010, there was still plenty of space for seating. Our large group spent a far more pleasurable evening in here than at the nearby Miller of Mansfield, which attracts a far younger and rowdier demographic.

There are three handpulls for ale, serving the usual Courage Best, as well as plenty of regular cooking lagers on draught. There's also a basic pub food menu.

Seating is available around the back in a beer garden, with some cover, for smokers.