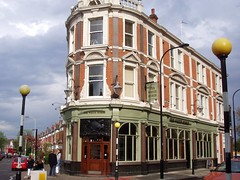 The White Horse was a pub near Hampstead Heath Station. According to the Oct/Nov 2017 London Drinker, it has now closed. However, according to Kentishtowner, it's due to reopen in September 2018 as a branch of the Cork & Bottle wine bar.

A large and pleasant pub near Hampstead Heath Station.

Inside there are plenty of tables; on a Sunday late-afternoon, there was still plenty of space to sit down. Windows run along two walls of the pub, which is sited at the intersection of two roads. The bar runs the length of the main pub room, with pumps on both sides, serving an upper and lower seating area. The lower side of the bar was taken up with those watching the sport, but from the other (upper) side there wasn't even a sense that sport was being played. Music was playing, but it was not particularly noticeable.

Board games are held behind the bar, including Scrabble.

The real ales on tap are Shepherd Neame Master Brew, Bombardier, Doom Bar, Old Hooky and Deuchars IPA (the last two were off on our visit). There's a good wine list as well, with an excellent riesling coming in at £3.50 for a small glass. Rather more surprisingly pricy was the pint of lemonade (£3).

Food was being served, with mains priced at £7.50-£9, and several Thai options on the menu.