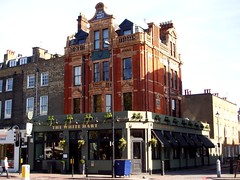 The White Hart was a pub in Kennington. It closed in spring 2010, and reopened after refurbishment in May 2010 as the Tommyfield (see Dos Hermanos review). Although the ownership (Renaissance Pubs) hasn't changed, the intention is to change a number of things about the pub, hence the renaming.

The information below is retained for people who want to know what it was like as the White Hart.

Pub in Kennington, on the gastro side but nice enough, located on the corner of Cleaver Street and Kennington Lane.

Kake visited on a Sunday lunchtime in June 2008. Beers available were Landlord (£3.10/pint) and Bombardier. The Landlord was a little cloudy but it tasted fine. There were also a few people enjoying a jug of Pimms.

A menu was chalked up on a board beside the bar, but there was a slightly reduced selection on offer (not sure if this was because it was Sunday or because it was lunchtime), so I was given a printed menu instead. Starters were between £4.75 (soup of the day with crusty bread) and £7 (Italian meats, buffalo mozzarella, and bread; larger portion available for £13). Mains were between £9 (cheeseburger with salad and fries) and £15 (11oz steak); the one that caught my eye was roast duck with Puy lentils, Madeira and mushroom ragout (£12). Bar snacks (e.g. fat chips) are available too.

I tried one of the starters; baked goat cheese with vegetable stack and tomato fondant (£6) photo. The vegetables were courgettes, aubergines, and red pepper, cooked just right. The tomato fondant was clearly home-made, and the cheese was a generous portion. I'd order it again.

The seating is on two levels; the floor is raised up behind a partition around the front and the south side of the pub, and tables for two, four, or six people are placed there next to large windows. One little area beside the door has armchairs. The rest of the seating is on the ground floor, at long tables. On my visit, the tables were all pre-laid with cutlery and napkins (but then it was lunchtime).

There's an open kitchen at the back of the pub, and a bookable function room upstairs. It's possible to book tables too, and they also offer table service (indeed, the young lady behind the bar seemed a little discombobulated by me wanting to order my food at the bar, even though she'd happily served me a pint there).

Background music was by Bob Dylan. There appears to be free wireless; at least, there was an open network named after the pub, and it worked for me.