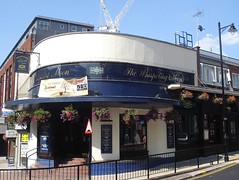 On Kake and bob's Monday late afternoon visit in August 2011, there were lots of uncleared glasses on the tables. The real ales were basically limited to the usual "boring" Wetherspoons options of Ruddles, Abbot Ale, and London Pride, though they did also have Thornbridge Jaipur on at £2.50/pint and also two real ciders including Addlestones Cloudy.

Accessibility: Several steps at the front, but there's level access at the side. Didn't check the toilets.