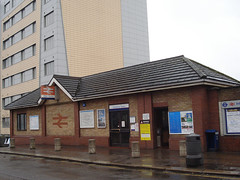 According to Ian Visits, in early 2021 a new entrance opened to replace the older one shown here, offering full step-free access and an accessible toilet (on the paid side of the ticket barriers).

Before the upgrade it had a small free bookswap shelf in the ticket office, which according to Books For London was set up in April 2010 photo as of December 2017. We're not sure if there's still a bookswap in the new station building.