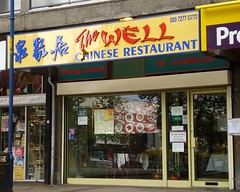 Now closed; was a Chinese restaurant and takeaway at Elephant & Castle. As of mid-2012, the premises were occupied by a pan-Asian restaurant called Nom Noms Cafe, in 2014 it is occupied by After Taste, SE1 6SF.

Chinese restaurant at Elephant & Castle, with online ordering through Urbanbite.

Kake and bob gave them another go on a Saturday evening in July 2009, ordering via Urbanbite. Among the starters, deep-fried salt and chilli squid (£4.20) was not good; there was too much of the batter coating, which was bland and very greasy and had failed to stick to the squid. Deep-fried corn-smoked chicken (£3.60) was better, though still nothing special, and no smokiness was detectable. Pork dumplings (£3.70) — see secretlondon's photo linked above — were fine.

Moving on to mains, Szechuan tofu (£3.40) was very bland; the sauce hadn't penetrated the tofu at all. Kake initially mistook the fried aubergine in yellow bean sauce (£3.40) for sea-spiced aubergine, and indeed they may have just sent us the wrong thing. In any case, it had a reasonable flavour but was spoiled by excessive greasiness. Boiled rice (£1.70) was below average.