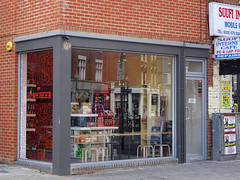 Specialist beer shop in Balham with another branch in Tooting (and a now-closed one in Clapham Junction). It describes itself as a "craft beer emporium", but as well as bottled beers it also sells homebrew supplies and growlers.

secretlondon visited one Monday in February 2016. It has a large selection of bottles — all the usual London craft beers you find in somewhere like Oddbins, but much wider variety and with knowledgeable and interested staff. They have a few beers on draft (I am guessing keg not handpull). When I visited they had four draft beers including ones from Orbit and Weird Beard. They sell different size growlers and by the glass.

In April there were people sitting outside and others buying beer to drink on the premises. I was actually asked if my bottles of beer were "takeout". It's probably quite cheap to drink on site, compared to bottled craft beer in a pub, although I'm not sure there is a toilet.