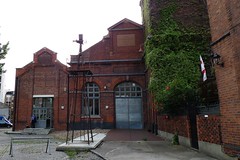 Wapping Food was a restaurant with art space, housed in a converted power station in Wapping. It closed at the end of 2013.

Restaurant with art space, housed in a converted power station in Wapping.

Kake and Ewan visited on a Friday evening in June 2008. We hadn't booked, and when we admitted this we were told that we'd be lucky to get a table — despite this, we were seated after a short wait.

Glasses of tap water arrived shortly after we'd asked for them, and bread was offered minutes later; the bread was excellent; proper sourdough with a holey texture and a good sour flavour. We only got one slice each, but weren't too put out by this.

We did have a bit of a wait for both starters and mains, but we never got the impression that we'd been forgotten about; also, it was a busy Friday night, and the owner mentioned to us that she was a person short.

Kake started with "tiger prawns, avocado, noodle cakes, preserved lemon, and salmon roe" (£8.50) photo. Although I had slight reservations about this working, it was good. The avocado was neither underripe nor mushy; the noodle cakes were crisp, light, and ungreasy; and the prawns were just right. Ewan had the only vegetarian option; "wild mushroom bruschetta, buffalo mozzarella, and truffle oil" (£7) photo.

We'd ordered cocktails prior to ordering our food, but Ewan's (an Earl Grey "mar-tea-ni") arrived just after our starters, and Kake's (a long combination of cassis, gin, and lemon) shortly before we finished said starters — so we ended up drinking them between courses instead of pre-dinner; this was actually a surprisingly nice change, though unintentional on everyone's part. We were a little disappointed by the cocktails themselves, though; Ewan felt his martini was lacking in alcohol kick, and Kake's bramble tasted primarily of citrus, with the cassis flavour almost completely overwhelmed.

For mains, Kake had "pan fried wild sea bass, cherry tomatoes, Dorset crab and potato filled courgette flower" (£17.50) photo. I had a moment of fear when it arrived, as it all looked very fried. I was a fool for thinking this; it was great. The fish was cooked just right, and the skin was nicely crispy; and although the stuffed courgette flower was battered and deep-fried, it was light and not greasy. Ewan was again stuck with the sole vegetarian option — risotto primavera with goat cheese and mint (£12.50) photo, but seemed quite pleased with it.

We were told that the menu changes every month, and is also tweaked from day to day.

Kake's verdict: I want to come back, and I will.