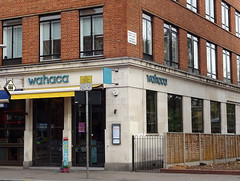 Mexican restaurant near Waterloo Station, part of a small chain. Like the rest of the chain, it doesn't take bookings. It's an odd and rather claustrophobic space, located in a basement with a low ceiling and diners packed in tightly at small tables arranged in long rows.

Kake and friend visited on a Wednesday evening in September 2015. When we arrived a little before 6:30pm they told us there'd be about a half hour wait, which turned out to be a fairly accurate assessment. They gave us a buzzer to let us know when our table was ready, and invited us to sit in the bar area while we waited.

Once finally seated, we found the space very crowded and noisy, though at least it was well-lit. It wasn't easy for us to hear each other speak, and even our waiter had trouble hearing us.

We chose the Wahaca selection (£20 for two to share), which comprised three pork pibil tacos, three cactus and corn tacos, a pinto bean quesadilla, two chicken caesar tostadas, and two sweet potato taquitos. On checking later, the price for this turned out to be exactly the total price of ordering the items individually — it would have been good to have had some indication of this, since set selections usually involve some form of discount over individual ordering.

Corn and cactus tacos (£4) photo were best eaten immediately, as the juicy filling quickly soaked through the tortillas. They were good, though, if somewhat messy, with good textural contrast in the filling and plenty of flavour. Pork pibil tacos (£4.10) were also good, with plenty of chilli heat.

Pinto bean quesadilla (£3.75) photo was fine but a bit boring; we definitely needed the chilli sauces provided in bottles on the table. The beans were possibly a little too soft, but not falling apart.

Chicken caesar tostadas (£4.20) photo were OK; the topping was again a bit boring, but it was rescued by the crunch of the tostadas below.

Sweet potato taquitos (£4) photo were very good. The sweetness of the sweet potato was well-managed, and its softness was a good contrast to the crispy shells.

Service in general was helpful and efficient. However, it took ages to get the bill, as it was so noisy the only way to get the staff's attention was to wave our arms around. Our waiter (and a card on the table) had urged us to use their app to pay, but they'd already taken the tablemat with our table number on, which we'd have needed to do so.

Kake's verdict: I enjoyed the food, but the venue was far too noisy for me to want to come back, and the "no booking" policy is also rather offputting.

Accessibility: A step to get in, then a flight of steps with handrails separated from the actual steps, far enough away to make them very awkward to use. There's also a lift to let you circumvent the stairs, but this was out of order on our visit. Toilets are up a flight of stairs, and it wasn't obvious if there was an accessible one on the ground floor.