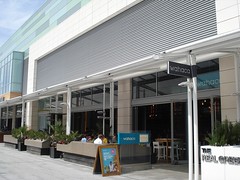 Mexican restaurant in the Westfield shopping centre in Shepherd's Bush. It opened in 2008 as the second branch of a small chain.

James and friend visited for lunch in April 2009 and quite enjoyed it. We opted for the tasting menu, which comes in tapas-like small bites.

To start with, we were served some surprisingly nice tortilla chips with guacamole. We were also presented with chipotle sauce (very good) and salsa verde (fresh tasting green chilli sauce). I would have liked more of the chipotle, though there was enough of the salsa verde. These were not replaced throughout the meal, they were intended to last through the tasting menu. Neither of us were particularly fond of mackerel and there wasn't even room to swap it for the cheaper vegetarian version of the same dish.

There were five dishes on the tasting menu. Pork pibil tacos were delicious, mackerel not so much. Espinacas tacos were tasty. Quesadillas very strange with english cheese but nice. Taquitos (deep fried rolls with cheese and filling in) were interesting with a satisfying crunch that complemented the flavour quite well.

We also had mohitos, which were £6 each. Probably the best mohito I've had in London, I didn't regret the price tag at all.

All in all, it was a very delicious lunch, and quite reasonable at about £35 for two including a cocktail each and sparkling water. Service was a little disappointing and we had to wait about 15 minutes for our tasting menu after the tortilla chips. It then all arrived at once and we ran out of table space.

Next time, I'd like to try their salad. It comes in a bowl that is a deep fried tortilla.