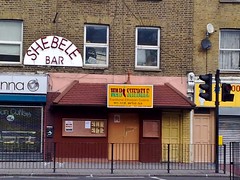 Wabi Shebele was an Ethiopian restaurant on New Kent Road between Elephant and Castle and the Bricklayers Arms roundabout. According to the LondonSE1 forum, it closed around the end of 2010/start of 2011.

As of early 2011, the premises were occupied by a Turkish restaurant called Nese (see Southwark News review), but according to Chowhound as of October 2011 this has been replaced by another Ethiopian restaurant called Habesha.

The information below is retained for people who want to know what it used to be like as Wabi Shebele.

Ethiopian restaurant on New Kent Road between Elephant and Castle and the Bricklayers Arms roundabout. It has live entertainment at weekends and the main eating area surrounds a space in front of a stage with traditional instruments and neon Ge'ez characters on the wall. A leaflet secretlondon has says they have weekend shows with "full traditional instruments and clothes". Some of the tables are 'traditional' with different seats and circular tables.

secretlondon popped in here on a whim one Monday evening in May 2010. I had some spiced tea (£1.50) and awaze tibs (£8.75) which arrived on the traditional injeera. It was nice and spicy.

There was background recorded Ethiopian music and it was quite dark. They are licensed but I didn't have any.

secretlondon liked the food and would like to try some more and see the live entertainment.