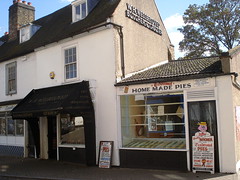 W H Wellbeloved was a butchers shop in Deptford. It closed for good in July 2021 when the owner retired.

Butchers on Tanners Hill, near one end of Deptford High Street. Closed on Sundays.

bob visited on a Saturday afternoon in August 2008, when there was no queue. While the shop had run out of fillet steak, the sirloin was very good. The steak pasty was full of meat but really needed a touch more seasoning and vegetables, while the scotch egg was fine. Toulouse sausages were fantastic and very garlicky. The black pudding, while good, isn't handmade.

Kake likes the pies, and also occasionally buys the sausage rolls, but it should be noted that the sausage rolls aren't "gourmet" ones, and the meat is a very bright pink; they're only £1.25 each for a nice long one though (last sampled October 2014).