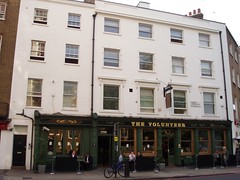 It's a popular place, especially given there are plenty of tables inside stretching around the bar and into a side area. (The side area may be reserved for diners at peak times — not sure.) Decor leans heavily on drapes and chandeliers and picture frames and the like. There are also a few tables out on the street for smokers.

There are several handpulls at the bar, with regulars like London Pride and Doom Bar. The range of lagers and ciders is good as expected, similar to other Metro Professionals pubs, including the usual Belgians (Leffe, Hoegaarden), Sierra Nevada and other premium lagers.

When Kake and Ewan visited late on a Thursday evening in October 2009, around 9pm, the pub was filled with drinkers and finding space was difficult, though we managed to grab one of the small tables outside on the street. Music was playing, and the noise of conversation was fairly deafening. On another visit on a Wednesday evening in June 2012, there were a fair few tables free inside at 6:30pm, but it filled up rapidly after this; the music was thankfully less loud this time.

They also do bar snacks, which are written up on a blackboard behind the bar. On Kake's June 2012 visit, the options included edamame, chorizo with bread, and asparagus with minted goat cheese dip. The edamame (£2.50) photo were really not very good; they were both overcooked and desiccated, suggesting that they may have been precooked and then reheated, and in any case rendering them nearly inedible.