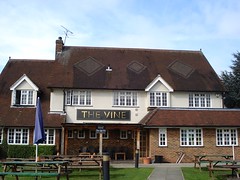 It has a large beer garden with plenty of picnic bench seating and a children's play area. On our Monday lunchtime visit in October 2013 there was a bouncy castle in the process of being inflated, and according to a comment on Netmums this seems to be a fairly regular occurrence. There's a covered porch with chairs and tables photo for bad-weather smoking.

Kake visited on a Monday lunchtime in October 2013. The handpumps were clipped for McMullens Country Bitter, AK, and IPA; the seasonal Halo Trust had just run out. A pint of lime and soda was £1.40.

Food is served from a menu which looks on the interesting side for pub food, plus a small selection of specials.

Grilled salmon with puy lentils and roasted vegetables (£9.45) photo was a little oddly executed. The salmon was in several pieces, some of which were drastically overcooked to the point of resembling jerky. The roasted vegetables had a reasonable flavour and came in a generous portion, but the puy lentils were few and far between.

According to a sign seen in October 2013, quiz night is Thursday.

Child-friendliness: As noted above, the pub has a rather nice outdoor play area. The accessible toilet doubles as a baby-change.

Accessibility: The pub has its own car park, accessed from the High Street side. Step-free access from the car park (and High Street) via a long, shallow ramp with a 90-degree turn at the end. Step-free to the accessible toilet too.