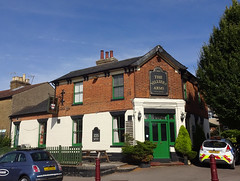 Nestled among residential streets, this is a proper old-fashioned corner pub, complete with patterned carpet, sports memorabilia (boxing and rugby in this case), a display of ceramic plates, and decorative mirrors advertising items such as Colman's mustard, Adnams ales, and Dewar's scotch whisky photo.

It's quite small, with the main room seating no more than 24 or so, and an even smaller and cosier space around the curve of the bar. Seating is a varied combination of banquettes, sofas, low stools, and normal chairs and tables, but all looks congruent with its surroundings rather than assembled purposefully with quirkiness in mind. There's a beer garden out the back and a couple of picnic tables out the front.

Kake visited on a Thursday afternoon in September 2016. Arriving just after their opening time of 4pm, I was the first customer of the day, but another two had turned up by the time I left half an hour later. Service was friendly and helpful. Country music was playing, not too loud.

Two of the three handpumps were on, offering Otter Bitter and Tring Ridgeway. A pint of lime and sparkling water was £1.70 (I deviated from my normal order of lime and soda because they didn't have a soft drinks gun and the staff member on duty warned me that the soda bottles weren't cold).

According to the 2011 Good Beer Guide, dogs are welcome and it has a real fire in winter. No food.

Kake's verdict: I liked it here, and I'd come back if I was in the area.

Accessibility: Two steps to get in. No steps to the gents' toilets once you're in (ladies' not checked, because they don't have a sign on the outside of the door of the gents' to warn you that it's the gents').