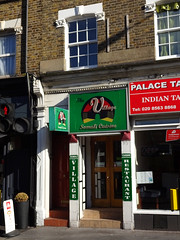 The main part of the restaurant is in the basement, where linen-covered tables seat around 40 people. The ceiling is low, as is the lighting, and the decor is very sparse photo, with the plain-painted walls and functional tiled floor relieved only by occasional touches such as geometric detailing on one wall and a sculpture in a niche at one end.

Kake visited on a Tuesday lunchtime in February 2016. There were only two other customers when I arrived around 1pm. Somali music was playing quietly, apparently on the radio.

Seafood pancake (£8) photo was quite tasty, with squid, prawns, salmon, and mussels in a creamy tomato sauce with occasional bits of melted cheese. The pancake itself was fairly bland, but this worked well with the generous quantity of filling. A fresh green chilli sauce and a sweet and sour sauce were provided on the side, both quite interestingly flavoured.

Somali tea (£1.20), frothed with milk and lightly spiced with cinnamon, came in a tall handled glass.

Payment after your meal is made at the till on the ground floor. Service was fairly taciturn, and the one staff member on duty (aside from the chef) spent most of her time out of the dining area. No service charge was added to the bill, and there was no obvious place to leave a tip.

Kake's verdict: The food was fine, and I might come back for dinner if I was in the area with a group. I probably wouldn't come back for lunch, though, particularly on my own, since the ambience of a dimly-lit basement and mostly-absent staff felt all wrong for that.

Accessibility: Two large steps into the ground-floor lobby, and a full flight of stairs down to the basement restaurant area. There are a couple of tables in the lobby area too, seating 2 and 4 people respectively, but these are clearly only for use by people who can't manage the stairs down. Toilets are step-free from the lobby, but fairly cramped.