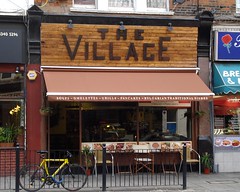 The Village was a small Bulgarian restaurant on Green Lanes in Harringay. According to Google Street View, it closed down by August 2014.

The all-wood styling of the sign on the frontage sets it apart from the other cafes and restaurants on this densely-packed strip. Inside, there's seating for about 30 people, and there are a couple of tables outside on the pavement too.

Kake visited on a Monday early evening in September 2009. There was only one other customer when I arrived a little before 6pm, but half an hour later there were half a dozen others in as well. Background music was playing; it sounded a bit Europoppish to me, but I am no expert on the genre.

They do various cafe-style food such as omelettes, salads, and sandwiches menu photo, though there are clues scattered throughout the menu that these might not all be what one might expect in a traditional British cafe — the salad options include the traditional Bulgarian salad shopska, while the soups include tarator, a chilled cucumber-yoghurt soup. They also do various kebabs and kofte as well as sweet and savoury pancakes menu photo. There's a separate menu section for traditional Bulgarian dishes menu photo, and there are daily Bulgarian specials too.

I went for one of the specials, which was described only as lamb with spinach (£6) — its name in Bulgarian, agneshko sas spanak, was similarly nonspecific. This turned out to be a stew based on very soft-cooked rice in a thin, slightly tomatoey sauce with long-cooked spinach and chunks of lamb. It wasn't bad at all, though it's perhaps not something I'd choose to order again as the spinach was overcooked to my taste and had lost most of its flavour. The texture of the rice reminded me a little of congee, though it wasn't quite that soft. The lamb was quite tender, though it still had some texture to it.

On the side, I was brought a salad which consisted mostly of chopped cucumber and tomatoes, with a few carrot slivers and a single olive on top to liven it up a bit. I was also brought a basket of bread — not my favourite kind, being white and fairly fluffy, but it was a decent example of what it was trying to be. There was no extra charge on the bill for either of these.

With my meal, I had a glass of ayran (£1), a yoghurt-based drink, which was fine. I had a little time to kill afterwards, so I had a cup of tea (£1), which was weak and very milky (just the way I like it) and came in a glass mug.

Service was friendly, and the food and drinks came very quickly. No service charge was added to the bill.

Accessibility: One rather high step up to get in. Step-free to the toilets once you're in.