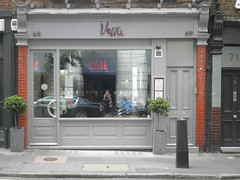 Verru was a small, upmarket restaurant on Marylebone Lane, serving Scandinavian and Baltic food. It has now closed.

A sign in the window in November 2013 stated that the property was under new ownership and Verru would shortly be replaced with 'a new fine dining restaurant' from Michael Riemenschneider. This venture didn't last very long and as of August 2014 the premises are vacant.

The information below is retained for historical reference.

A small, upmarket restaurant on Marylebone Lane, serving Scandinavian and Baltic food. The head chef is Estonian, and they serve Estonian beer (photo).

There really isn't much space inside, but the elegant decor manages to be avoid it feeling crammed. There is a curtain around the front door to keep the draught out which adds to the cosiness. It can get quite noisy however.

Kat visited on a Friday lunchtime in February 2013 with her parents. We'd booked via Toptable, and it was almost full when we arrived. We were offered a choice of bread: rosemary, and garlic (very garlic-y indeed but quite chewy). Our water glasses were kept topped up throughout the meal.

The starters (£7-£9) are mostly fish/seafood based, and the mains focusing on game and meat. Kat's crab starter was fine but unexciting, the main of duck breast with mango and sweet potato puree (around £18) was much more interesting. The duck was excellently cooked, juicy with a decent amount of skin/fat left on it, the mango was fine but I wasn't sure if really worked. The presentation on the plate was lovely though. Other mains of entrecote steak (with chips in a tiny steel bucket) and roe deer went down very well. Best of all however were the puddings (around £5): a really good raspberry cheesecake, a rhubarb crumble and a strawberry meringue were all excellent (if not very seasonal). The bill came to around £40/head including wine and service.

Kat's verdict: my parents loved it, I thought the a la carte was a bit overpriced for what we got, but would probably return for the set lunch menu (£12 for two courses) plus an extra pudding for luck.