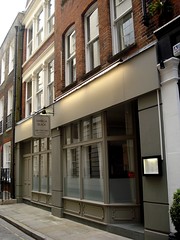 Vanilla Black was a totally vegetarian restaurant near Chancery Lane Station. It closed down in 2020, with the owners stating that the impact of Covid-19 made it financially unviable to reopen at the existing site.

As well as all the food being vegetarian, several dishes are vegan or can be veganised on request, and they also have a five-course vegan set menu (which must be taken by the entire table).

We've visited a few times now, most recently on a Tuesday evening in March 2018. On this occasion, bob and the four others in his party went for the five-course vegan menu (£55/head plus £32/head for matched wines) photos. Each course was delicous and interesting, but many of us felt the smoked soft "cheese" and the coconut sorbet were the highlights. bob really enjoyed the shiitake mushroom, which is a surprise because I normally only tolerate them; the way it had been cooked removed some of the things I find odd about its texture. Several of us also enjoyed the wild nettle mojito mocktail. Service was attentive.

Kake and Pippa previously visited on a Friday early evening in July 2015. Service was friendly and efficient, and clearly aiming towards the higher end of the market without being stuffy (and without insisting on pouring our wine for us). Background music was playing, not too loud.

We were given an amuse-bouche of mango puree on a mushroom cracker photo; this was OK, though the cracker was a bit chewy. A complimentary bread basket was great; one seeded bread and one raisin bread, both with excellent crusts.

Kake's starter of whipped jacket potato with tomato syrup and crispy onion photo was pretty good. The whipped potato had a lovely light texture with just the right amount of richness and no glueiness at all, and the tomato syrup was a pleasing contrast (and not too sweet). The crispy onion had a rather stodgy batter. The cubes of Wensleydale cheese in the very bottom of the dish were a bit much for me; I'd have enjoyed the dish a little more without them, but this is just personal taste. Pippa's starter of dried yeast icecream photo was also good, with the yeast flavour really coming through.

Kake's main course of seared seaweed and cabbage with pickled potatoes photo was less successful. Although the individual components were all fine in isolation, and the pickled potatoes gave the whole thing a rather nice "salt and vinegar" tang, overall it was just too salty. Everything on the plate was salty except for the rather bland soda bread sauce, and it all added up to the point where I couldn't finish it due to salt overload.

We skipped dessert, but did have some after-dinner chocolates photo; three little truffles and a very soft fudge. The violet truffle was particularly good, with a light sprinkle of salt to bring out the flavour. There was quite a lot of the fudge, more than we really wanted given how intensely sweet it was.

Kake's verdict: Overall, things seem to have improved substantially since I first visited in 2009 (see older version of this page for details). I would certainly now recommend this place to vegetarians, though perhaps not to meat eaters who aren't short of places to visit for fine dining.

Accessibility: One fairly high step up to get in, another step to get to the back part of the seating area, and the toilets are down a flight of stairs with a bend in the middle and a handrail only part of the way down.