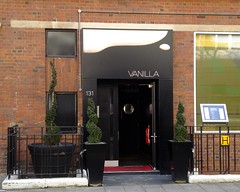 Vanilla was a basement restaurant and bar in Fitzrovia, offering modern French cuisine. The walk-in part of the business has now closed, though as of mid-2015 the venue is still in use for private hire.

Most of the space is given to the blindingly-white bar area, while the restaurant sits in a contrasting black-and-silver galley-style area to one side photo. We visited at lunchtime, but we suspect that in the evening the noise from the bar could make the restaurant a lot less pleasant; the separation between the two areas is only token, and Vanilla's website advertises evening DJs.

Vanilla has gone through a few different phases since it first opened in 2007, and although initial reviews were sharply negative, there have been at least two different chefs since the initial flurry of restaurant critic visits. At some point in 2008-9 they were offering an interesting-sounding tasting menu, but as of early 2010 they're back to a conventional set menu plus a la carte.

Kake and bob visited on a Thursday lunchtime in March 2010. The place was empty when we arrived at 1pm, but a couple of other small parties turned up while we were there. Music was playing, though not annoyingly loudly.

Kake started with potato gnocchi with cherry tomatoes, garlic, and basil (£7.50) photo. This was pretty good; the sauce was well-flavoured and the accompanying parmesan tuile was just right to give a crisp textural contrast to the soft gnocchi. bob had smoked duck and quail egg salad (£8) photo; the salad dressing was good and well-balanced in flavour, and the duck only lightly smoked.

Kake's main of monkfish with crispy Parma ham, sage, and Puy lentils (££14.50) photo also featured a tuile-like item, the crispy ham, which again was a welcome addition to the textures of the dish. The monkfish was cooked well and the exterior crust flavoured nicely; the lentils perhaps a notch less well-executed but still fine. bob's confit pork belly with caramelised apples and braised cabbage (£15) photo was competent if unexciting.

Service was smooth and professional. Tap water was brought in a jug with ice, and bread and butter were complimentary. A 12.5% service charge was added to the bill.

Kake's verdict: A lot better than the online (out of date) reviews had led me to expect; pretty good food at non-exorbitant prices, and the set menu photo looked reasonable too. I'd certainly put it on the shortlist if I was looking for somewhere to have an interesting lunch in the area. I expect I would hate it in the evening though.

Accessibility: Both restaurant and bar are in the basement, down a flight of stairs. The toilets are on the same level as the bar. There may be a couple of steps between the bar and restaurant (can't remember).