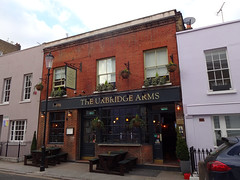 Inside, this is a cosy little traditional pub, with a central island bar, carpeted floors and several different areas of seating around both sides of the bar, including some larger areas down the back towards the toilets. On either side of the central bar is an open fireplace (these appear to be coal effect and fired by gas, rather than open fires). There are a couple of solid wooden tables out the front of the pub for smokers.

Billy, Martin, bob, and others visited on a Thursday evening in March 2010. Three real ales were available; London Pride, St Austell Tribute (£3.40/pint), and one other. The Tribute was fine, but the other two were slightly below par. On Ewan and Kake's visit in November 2011, those two ales were still available, as well as Harvey's Sussex Best, which was perfectly fine with a lively head.

On both visits, the pub was busy, but not full; most but not all of the tables were taken throughout the night.