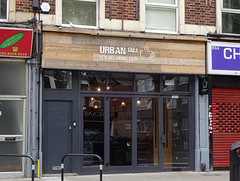 Urban Guj was an Indian cafe and tea shop in Thornton Heath. In June 2021, the owner announced on Facebook that it would be closing for both eat-in and delivery at the end of that week, and that the business would continue as catering and private hire only.

Indian cafe and tea shop in Thornton Heath. It opened in July 2019.

The decor is based around browns and greys, with mottled grey vinyl on the floor mirroring a raw-concrete feature wall. Light-wood tables and wood panelling on the other wall soften the look, and subtle provision of colour comes via large photos of menu items hanging inside distressed-metal frames. Lighting is a mix of caged "bare bulbs" and copper lampshades.

It seats around 35 inside, on a combination of high stools, freestanding chairs, and a narrow banquette running the length of one wall, plus another four or so on the pavement out front if weather allows. At the far end is a service counter where orders are taken and paid for — they'll bring it to your table when it's ready.

Kake first visited on a Wednesday morning in July 2019. Arriving shortly after their opening time of 9am, I was one of two customers, and another popped in for a takeaway chai while I was there. Music was playing, slightly louder than would have been ideal if I'd been trying to have a conversation, augmented by traffic noise from the busy road outside (they had the front open to let the breeze in). On later weekday afternoon visits in August 2019, there were several people in both times.

Wada pau (£4.90 in July 2019) photo was very good, with plenty of flavour from the spicy chutney inside. The bun and potato patty were both good in themselves, and sufficiently different in texture and flavour to stop this "carb-in-carb" dish from being at all boring. Judicious inclusion of red onion and a good sprinkling of sev gave added texture in the form of crunch.

Pani puri (£5 for six in August 2019) photo were a little disappointing; the shells weren't crisp enough, and one of them leaked. However, the fillings were fine, and the staff encouraged us to ask for a refill of the pani (spiced water) if we wanted more.

Mumbai toastie (£6 in August 2019) photo had plenty of crunch from fresh tomato, cucumber, and red onion; these, along with the toasted bread, were a good contrast to the soft potato filling. Cheese was present but not overwhelming. It did fall apart a little too easily, partly because it was cut into four triangles instead of just two.

A plain masala tea (£2.75 in July 2019) was fine; unsweetened, quite milky, and mild in terms of spices. Lemongrass masala tea (August 2019) was also fine, with a clear lemongrass flavour.

They have WiFi (ask staff for the password) and many plug sockets (with integrated phone-charging points).

Accessibility: No actual step to get in, but the floor is raised slightly above the pavement so they've made a sort of tiny but awkwardly-oriented interior ramp, covered with a non-slip mat. Around two-thirds of the seating is on high stools, and the rest is all slightly higher than average, to the point where an average-height-or-shorter adult will find their feet dangling. All the plug sockets are either down by the floor under the banquette, or next to the high stools. Step-free to the toilet, which is a single accessible cubicle with grab bars, low sink, and alarm cord.