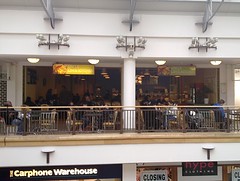 Malaysian restaurant/cafe in the Whitgift Centre in Croydon. They also do takeaway and delivery via Just Eat (but note the early closing times).

The food is split between a canteen-style hot counter and a menu of cooked-to-order Malaysian specialties photo as of June 2013 — some of these, however, are only available on weekends (e.g. the Hainan chicken rice is only available Friday-Sunday).

bob visited on a Saturday afternoon in January 2011, just before the lunchtime rush. I had one of the weekend specials, the Hainan chicken rice (£5.80) photo, which consisted of some very tasty rice cooked in chicken stock and some very succulent poached chicken.

Kake visited on a Friday lunchtime in June 2012. I got there around 1pm and it was fairly empty. I chose one of the Malaysian dishes, char kway teow (炒粿條; £5.80) photo. They offered me a choice of spice levels; "medium spicy" was around the middle of my tolerance level and I'll probably go for "spicy" next time. It was pretty good, though I think not the best I've had in London. I might have preferred to get more than three medium-sized prawns, and the Chinese sausage that usually features in this dish was entirely absent. However, the squid was nicely cooked (not chewy at all), the fishcake was juicily-textured and well-flavoured without being too salty, and the dish as a whole had just the right amount of oil to stop the noodles sticking together without making it too greasy.

The takeaway is done well, too. Kake got the prawn mee (prawn noodle soup; £6.90) as a takeaway in July 2012. It was well-packaged, with the soup in a cling-wrapped tub separate from the noodles, and a generous portion too. The noodles had a good texture, the prawns were cooked just right (not even slightly overdone), and the broth was wonderfully prawny.

Even the hot-counter stuff is tasty and varied; they have the usual sweet-and-sour gloop for the less adventurous, but they also have more interesting dishes.

Kake's verdict: I'm a little biased, as I live locally and come here a lot, but I've always found the staff very friendly and helpful, even when I descend on them with an unspecified-but-large number of Croydon Fun Weekend attendees and start moving all the tables around.

Child-friendliness: There are several highchairs available for children (though as of January 2013 these have no trays). There are baby changing facilities provided by the Whitgift Centre on the floor above Uncle Lim's, reached via a short walk and a lift.

Accessibility: The entrance to the cafe is open and flat. While it is on the first floor, the shopping centre has several lifts. There is only one toilet, but it's an accessible one.

Getting here: It's on the upper level of the Whitgift Centre, opposite W H Smith and next to Clarks. If coming from the pedestrianised North End (and able to use steps), the easiest way to find it is to use the entrance next to HMV and take the stairs on the right-hand side just inside the entrance.