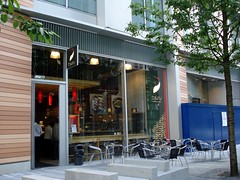 Tsuru was a modern-style Japanese cafe/takeaway just off Southwark Street in Borough. It has now closed and been replaced by a branch of Tonkotsu (which is part of the same restaurant group).

Modern-style Japanese cafe/takeaway just off Southwark Street in Borough. They also have two other branches, one just off Bishopsgate a little north of Liverpool Street Station, and the other near Mansion House Station.

Their main lunchtime custom is local office workers coming in for takeaway, but they also have eat-in space for around 15-20 people, plus plenty of outside seating on the pedestrian stretch at the Southwark Street end of Canvey Street. (Note that they're also open in the evenings, when there's more of a restaurant ambience.)

They are very proud of their home-made katsu curry sauce, which they advertise as being cooked for eight hours, and which is served over various breaded and fried proteins such as chicken, pork, etc, with rice on the side. They also offer a number of pre-prepared sushi boxes.

Kake visited on a Wednesday lunchtime in June 2008. I had no trouble finding a seat; almost all of the other customers who came and went during my visit were just there for takeaway. I tried the chef's special sushi box photo. Although this selection wasn't too exciting, including no fish other than tuna and salmon, the execution was above average for pre-made takeaway sushi; it hadn't been over-chilled, and there was nothing wrong with either fish or rice. Purists (and doop) might weep at the inclusion of tuna mayo maki, though.

Although as of early 2010 they do offer delivery, this is limited to a very small area, and you have to preorder rather than just calling when you want it.

Kake's verdict: I want to come back and try the curry, and I have other things to explore in this area, so probably will. I'm fairly sure that if I worked in one of the nearby offices then this would be on my rotation of lunch places. I also plan to come back in the evening some time, since I'm curious to see how the restaurant thing works out in a space like this.