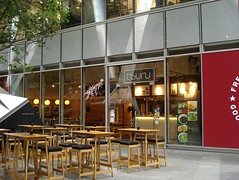 Tsuru was a Japanese restaurant and takeaway near Liverpool Street Station. It closed down in June 2017.

Japanese restaurant and takeaway located on Broadgate Plaza, which sits alongside the Broadgate Tower skyscraper just north of Liverpool Street Station. They have two other branches, one just off Southwark Street in Borough and the other near Mansion House Station. As well as sushi, they serve hot food including the "Tsuru Scotch egg" and Japanese katsu curry, the latter of which is advertised as using a house-made curry sauce cooked for eight hours.

Inside, the decor is clean and modern. Matte black tiles near the entrance give way to dark wooden floorboards further back. Seating is mainly at sturdy tall wooden tables flanked by padded tall stools, though there's also a high banquette at the back and a single table with normal-height chairs near the door. Fridges to the other side of the door hold wine, soft drinks, and pre-made sushi boxes. There's more tall-stool seating outside, under the clear glass roof that covers the entire plaza.

Kake visited on a Thursday afternoon in September 2012. Unsurprisingly for the time of day, there were no other customers when I arrived around 4:30pm, though one person did pop in a bit later for a takeaway box. Music was playing (possibly a Will Young CD).

The sushi choice was limited to tuna and salmon, though this may have been due to me being there in the day; other reviews and the menu on their website state that a wider selection of fish is available in the evening. I went for a salmon box (£4.74) photo and some spicy tuna urumaki (inside-out rolls; £4.25) photo. The boxes were prettily presented, tied with pink raffia.

Happily, despite the sushi boxes coming direct from a fridge, they weren't over-chilled, so the rice had retained its texture. I would have preferred more seasoning in the rice, though. The fish tasted fresh, and the avocado in the salmon-avocado rolls was ripe and creamy yet not mushy at all. The pickled ginger was good quality; thinly sliced, not overly woody, and with a nice level of heat.

They were happy to provide tap water, though this came in a smallish glass only half filled, and there was no offer of a refill.

Kake's verdict: The sushi was fine though unexciting; if I came back, I'd try some of the hot food instead. However, the lack of accessible seating does mean that a return visit isn't all that likely.

Accessibility: Level access from Broadgate Plaza, with just a small ridge at the threshold, though the doors are a little heavy. Broadgate Plaza itself has level access from Primrose Street. There are steps to the plaza from Norton Folgate (the continuation of Bishopsgate), though there's also a lift (not sure if this has restricted operating hours though). Once inside, it's step-free, though there are only four normal-height chairs, with the rest of the interior and exterior seating provided by high stools at high tables (there's some normal-height seating to the side outside, but it appears to belong to a neighbouring cafe). There is an accessible toilet, but on our September 2012 visit it was out of order.