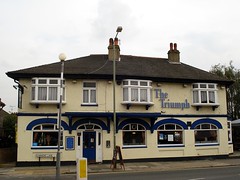 This former pub in North Finchley is now closed.

The interior is made up of a single room which is divided into two halves by the arrangement of furniture and pillars, rather than by walls. One side has a pool table, a dartboard, and a flatscreen TV, while the other has banquette seating plus upright padded chairs with and without arms. There's some outside seating too; picnic benches under umbrellas.

Kake visited on a Wednesday afternoon in September 2008. They have no handpumps, so I had a half of Strongbow (£1.50). There was no music, but there was a flatscreen showing daytime TV with the sound down low.

When I got here a little before 4pm there were maybe about half a dozen other people in; a group of young men hanging around the pool table, an older chap sitting on a stool at the bar, and a woman who seemed to be a friend of the lady behind the bar. While I was there, another woman popped in with her son to say hello to people. It seems to be the kind of pub you come to in the expectation of seeing people you know, rather than for anything intrinsic to the pub itself.

Accessibility: One step up to get in; level access to the bar, seating area, and toilets (ladies', at least) once you're in.