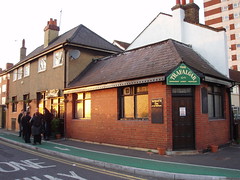 The Trafalgarr was a pub in South Wimbledon. According to the Aug/Sep 2021 London Drinker, it has now closed for good.