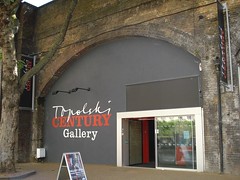 The Topolski Century Gallery was an art gallery consisting of a collection of murals housed in a couple of railway arches just to the north of Waterloo Station.

As of October 2010, it was no longer open to casual visitors — private tours, art classes, and events only. As of March 2013 there were plans to turn the space into a cafe. As of July 2013, the space had been stripped photo, but a notice in the window photo claimed that it will be reopening later in 2013. However, as of November 2013, Chris Heathcote reports that it has reopened not as a gallery but as a bar, though some of the paintings remain.

Art gallery consisting of a collection of murals housed in a couple of railway arches just to the north of Waterloo Station.

As of June 2010, entry was £2 for adults, £1 for children/students/OAPs, and free for SE1 residents with proof of address. The detailed guidebook is £3.50, but the illustrated guide leaflet is free, and works just fine for orientating yourself within the exhibition.

The murals were painted between 1975 and 1989 by Polish artist Feliks Topolski, and depict prominent people and events from the 20th century, including George Bernard Shaw photo, Aneurin Bevan, Benito Mussolini, H G Wells, Bertrand Russell, Martin Luther King, and Mick Jagger; and the Blitz, the end of the Raj, the Nuremberg Trials, the Festival of Britain, and the Cultural Revolution photo. These global themes are bookended by more personal ones — the murals begin with a depiction of the artist's mother and grandfather, and end with images of his children photo.

The exhibition is sensibly laid out, with signage on the floor and in freestanding notices to make sure that visitors don't lose track of where they are on the trail. Annotations on the guide leaflet provide clues to the identities of certain of the people in the murals, while others remain anonymous. The murals themselves are interspersed here and there with storyboards carrying information about what was happening in the artist's life at the time, and glass cases containing various of his drawings.

Accessibility: It's step-free to get in, and step-free throughout. The aisles are reasonably wide, though there are a few relatively tight corners. An agile wheelchair-user should be able to navigate through; people in larger powerchairs may have trouble. There are toilets but I didn't check them.

Getting here: Follow the signs in Waterloo Station for the South Bank exit, which comes out onto the west side of York Road. Turn left on exiting the station, and a short distance further up head left down the pedestrianised passage just before the railway bridge. The gallery is on your left just after this passage goes under the railway bridge itself.
Last visited by Kake, June 2010.
Last edited 2013-11-10 20:06:09 (version 10; diff). List all versions.