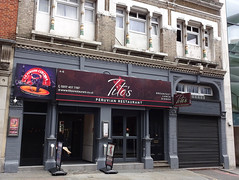 Tito's was a Peruvian restaurant near London Bridge Station. This location has now closed, and the chef and staff moved to 273 Clapham Road, SW9 9BQ. As of August 2019 the London Bridge premises are occupied by another Peruvian restaurant called Cuzco photo, which has the same overall management but according to a comment from management on their Facebook page is "a new creation of ours. With a different ideology".

It's set over two floors, though the upper floor is only used at busier times. On the ground floor, the ceiling is low and the space dimly lit by recessed spotlights, with very little natural light able to penetrate. Peruvian art prints hang on the walls, interspersed with ornately-framed mirrors. The seating is a mix of banquettes and small freestanding tables and chairs, all in shades of dark brown.

Kake visited on a Friday lunchtime in June 2017. There were a fair few people in when I arrived a little before 1:30pm, and more turned up while I was there. Music was playing, not too loud.

I went for the picante de camarones (spicy prawns; £16.90 including quinoa) photo. The prawns were competently cooked, so I was a bit disappointed that there were only six of them. The sauce wasn't exactly spicy, and was rather reminiscent of Heinz tomato soup. The quinoa was fine. The side salad was perfunctory, consisting mainly of shredded iceberg lettuce.

Service was OK, except that they sat me facing directly into a pillar even though there were plenty of better seats free both when I got there and throughout my visit. A 10% service charge was added to the bill.

They also used to operate as a sandwich shop, from here and also from premises on Gray's Inn Road and Exmouth Market. The latter two are now closed, and we're not sure if they still do sandwiches at London Bridge. (secretlondon popped in one lunchtime in July 2009 and had a chicken fajita from their sandwich shop menu to take away (£4.90). Their restaurant menu looked more interesting.)

Accessibility: A step to get in. The toilet is on the first floor, up a flight of stairs with a sturdy handrail.