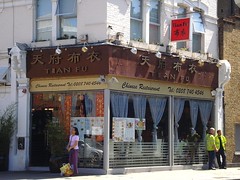 Small Sichuan restaurant in Shepherd's Bush, round the back of Westfield (but not actually in it). It used to be known as Bamboo House (雨竹軒), but changed its name some time in 2009.

The front section has floor-to-ceiling windows which let in plenty of light during the day. There are a couple of larger tables (six people) here, plus two smaller two-person ones tucked away to the side of the bar. Further back is a darker, cosier area with more seating.

The English name is an abbreviation of the Chinese name, 天府布衣 (tiān fǔ bù yī). As well as the main menu of Sichuan dishes, they also offer hotpot and dim sum. The main menu is fully bilingual (Chinese and English), and many of the dishes are illustrated with photos.

Kake first visited on a Friday late lunchtime in June 2010. There were a few other customers in, but no trouble finding me a place. Peaceful vocal music was playing (including what sounded like a Chinese rendition of "My Grandfather's Clock").

I went for the sliced pork with loofah (絲瓜肉片/sī guā ròu piàn; £7) photo and some plain rice (£1.80). The flavour of the pork and loofah dish was quite mild, but kept interesting by the occasional bit of ginger and garlic. The pork was cut a little haphazardly for my taste. The loofah was interesting, though — I'd not had this vegetable before. It was bitter in places, where the seeds hadn't been entirely removed, but it may be meant to be like this. The rice was a little mushy in places, but this may be because I was there towards the end of the lunch service. Service was fine. A 10% service charge was added to the bill.

Kake visited again on a Friday lunchtime in July 2013. There were a fair few people in when I arrived at 1pm, but again plenty of spare tables. Music was playing, this time British/American pop/rock.

I ordered two cold dishes, since it was a very warm day: crushed cucumber salad (天府拍黃瓜; £5.88) photo and Sichuan hot & spicy chilled noodles (麻辣鷄絲涼麵; £4.80) photo. Both were absolutely fine without being notably outstanding — I'd order either of them again, but would be equally happy to go for something else on the menu. The staff were careful to ensure that I'd noticed the noodles were chilled rather than hot.

Accessibility: One step to get in. The two-person tables are quite narrow, making it hard to get both your legs underneath them unless you're quite slim. Toilets are down a flight of stairs in the basement; there's a handrail on one side but it only covers the bottom half of the staircase, and it really is quite hard to get down there if you need to hold on to things when going down stairs.