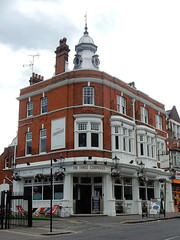 Pub in Hornsey. It's in the Good Beer Guide, though this entry was under management that departed in late 2014.

Entry is into a spacious high-ceilinged room with mismatched tables and chairs, each table surmounted by a trug containing cutlery, napkins, ketchup, and a stem of wildflowers in a glass bottle. The floor is exposed wood, echoing the carved-wood bar. Windows are all around, and patio doors provide a view onto the High Street as well as being opened up to let the breeze in during the summer (though iron railings with an attractive star detail prevent entry or exit this way). Copper-effect lampshades hang from the ceiling.

Further back is a darker, cosier room with an abundance of armchairs and some elegant glass separator screens. There's also some outside seating at the front and side of the pub, arranged along a nice but rather scuffed strip of mosaic tiling.

Kake visited on a Friday afternoon in July 2015. There were about half a dozen other people when I arrived a little after 3pm. Music was playing, not too loud.

Food is served, towards the gastro end of the spectrum. Photos of menu in July 2015: set lunch, American Food Month, main menu.

According to a sign seen outside in July 2015, there's a quiz every Tuesday from 8pm.

Accessibility: The right-hand entrance is step-free, and it's also step-free through to the accessible toilet, which is in the back room. The cubicle doors in the ladies' toilet open outwards.