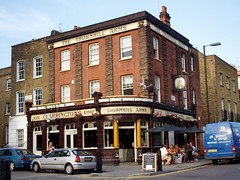 A pub by the Regent's Canal on Caledonian Road, just opposite Canal 125.

From the outside, this is a beautifully-tiled traditional pub, with all its old Charrington branding apparent. However, it's been gutted inside and remodelled with trendy patterned dark wallpaper, and a combination of tables at various heights, couches and banquettes around the edges of the room. Light is provided by small lamps and candles on each table. A stripped-down, basic bar sits in the middle of the room.

Despite its appearance inside, it still seems to attract a largely locals' crowd. On Ewan's December 2008 visit, sport was showing on two TV screens with the sound off and music playing, until a football game started, at which point the sound was turned back on. There were about 10-20 people in, with plenty of available tables, so it was pleasant enough to pass an hour or so.

There are no ales at the bar, with only standard lagers, including San Miguel (£3.30/pint) and Beck's Vier. No sign of any food.