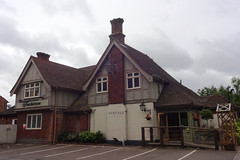 Vintage Inns (Mitchells and Butlers) pub in Upminster, a fair walk from the station and with only a four-times-daily bus service.

It's really more of a restaurant than a pub — drinkers are confined to a small strip of seating facing the bar, with the rest of the space reserved for diners except at the quietest of times.

The dining space is a reasonable size, but broken up with room dividers and pillars, creating a rather cosier feel than would have been possible otherwise. Flooring is a mix of stone tiles, carpet, and wood, and the chairs likewise a mix of upholstery and painted wood. A comfortable banquette runs along one wall. The windows are leaded, the curtains are valenced, and fabric flowers sit in vases on the tables.

Kake visited on a Saturday lunchtime in September 2016. There were two other small groups in when I arrived a little after noon, and several more arrived while I was there; by 12:30pm there was a good buzz of conversation, and by 12:45pm it felt quite full, though there were still free tables. Music was playing, not too loud.

Three of the six handpumps were on, clipped for Brakspear, Sharp's Doom Bar, and Westons Rosie's Pig. A pint of lime and soda was 95p.

I went for a prawn and smoked salmon sandwich (£6.25 including fries) photo. The fries were soft rather than crisp, but had a decent potato flavour. The bread was a ciabatta-style roll, fresh and with a decent flavour. The prawns were large and plump but surprisingly bland in flavour, so the addition of smoked salmon was a welcome one. The mayonnaise was fairly loose and nicely tangy, quite possibly made in-house.

I was greeted by a staff member as I entered, who showed me straight to a table and took my drink order there. However I did see other people ordering at the bar and seating themselves. No service charge was added to the bill.

Kake's verdict: Not really worth the faff of getting here, and not really a pub, but I'd imagine people who live within walking distance are very happy with it as a restaurant given the lack of other options in the area.

Child-friendliness: There were a couple of children having lunch during our visit. The pub has at least four highchairs, the type with no tray and very little back support.

Accessibility: A ramp to get in, with a turn at the end of it. Step-free to seating and toilets, including an accessible one. The pub has its own car park.