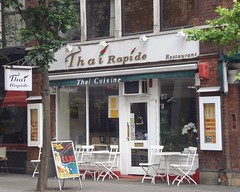 Now closed; was a Thai restaurant in Clerkenwell. As of December 2014 the premises are occupied by a kebab restaurant called Chifafa photo.

Thai restaurant in Clerkenwell. It's quite small, seating about 20.

bob, Dean, Richard, and John visited on a Wednesday evening in February 2010. We were the only customers when we arrived, but by the time we left there were another four. They seem to have several menus. When we sat down we basically got two each; the normal Thai menu and the more interesting one.

bob had tom yum soup to start, which was very tasty and the right level of spiciness. John had deep fried bean curd, which was okay but nothing special.

For mains, bob had a pork pad krapow, which was pretty good, along with some steamed rice. Everyone else's dishes looked good as well.

Our bill came to about £73 including a few bottles of Sinhga and diet coke.

bob's verdict: I certainly want to go back and try more of their dishes, especially from the more interesting menu.

Accessibility: Toilets are down a set of stairs.