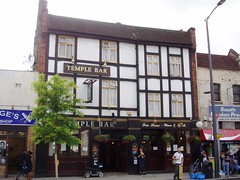 The Temple Bar was a large Irish pub on Walworth Road in Walworth. It closed near the beginning of 2011, and as of late January 2011 the windows are all whitewashed over.

According to the 13 January issue of local paper Southwark News, one of the freeholders (Mary Dempsey) is looking for another pub to run instead, and she's been told that the purchasers of the site plan to turn it into a pound shop.

This is a large pub and appears to have regular late night events. It has karaoke every Sunday. There were signs mentioning real ale but it didn't sell any - there were no hand pumps.

They do food from 11am-3pm weekdays (not sure weekends, but Sunday until 4pm) and there is a garden for smoking.

It is over 21s and signs say no hoods, shorts or tracksuits. Signs also referred to searching people, presumably during events.