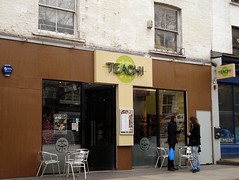 Teachi was a Chinese/dim sum restaurant in Camden Town, but has now closed and turned into a place called Bento Ramen.

The decor is modern and smart, and this theme continues through to the crockery, with carefully-chosen bowls, teacups, and teapots (though oddly enough, the spoons are determinedly British stainless steel).

Kake, Leon, and five other Perlmongers visited for a dim sum lunch on a Thursday in November 2008. We happily took advantage of their lunchtime dim sum offer - everything at £2/basket between noon and 4pm Monday through Sunday.

Arriving at 1pm, we hadn't booked but there was no problem seating us - indeed, we were the only people there at that point, though it filled up more during our visit.

Xiao long bao (Shanghai pork/soup dumplings) had a decent amount of good soup, but Kake felt the wrappers were a little thick and floury - still, overall, they're among the best I've had in London. "Potstickers" weren't actually potstickers in any sense of the word, being actually boiled dumplings with a chilli sauce, but they were certainly good, and I'd order them again. Vegetarian Peking dumplings were OK, but the wrappers had the same flouriness/thickness problem as the xiao long bao. Vietnamese spring rolls, fried beancurd rolls, and scallop siu mai (open-topped dumplings) were fine.

They happily brought us tap water, and refilled our glasses without being asked. Most of us had tea as well, which was charged for (£1-something/head) - Kake suspects there may actually have been a choice of tea, but we didn't specify and were brought jasmine, which was fine. We only got one small teapot between all of us, but it was refilled promptly.

The final bill was just over £8/head for ample food plus tea all round.

Kake's verdict: It's certainly hard to argue with these prices, and the quality was generally fine. On the strength of this visit I'd neither seek this place out nor avoid it, but I'd like to give it another go since Leon seems pretty keen on it.