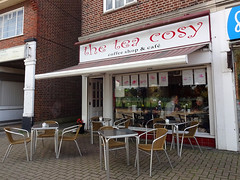 As well as a couple of tables outside, it seats around 45 or so inside, at freestanding tables covered with plastic gingham-effect tablecloths (slightly ripped) and topped with condiments and fabric flowers (slightly dusty) in small jars. Paintings priced for sale hang on the walls. In the corner at the back is a service counter with displays of cakes and scones — order and pay here, and your food will be brought to the table.

Kake visited on a Thursday lunchtime in September 2017. It was quite full when I arrived around 12:45pm, with only one or two free tables inside. Music was playing (a Fleetwood Mac CD), not too loud.

Savoury crepe with ham, mushrooms, cheese, and tomato (£3.70) photo was a generous size and reasonably well filled. (I'd have called it a pancake rather than a crepe, though; it wasn't really thin enough to be a crepe). The ingredients were nothing fancy, but decent quality, and the mushrooms in particular were well-handled - thinly sliced and well browned.

A pot of Earl Grey tea (£1.20) was made with a teabag, but was fine, served in a decent-sized pot with an ergonomically-pleasing cup.

Service was friendly and helpful even though they were really quite busy. No service charge was added, but there was a tip jar on the service counter.

Child-friendliness: They have a reasonably varied children's menu, and there were several children in during our visit. As of September 2017 there's a sign warning that children should be accompanied to the toilet due to very hot tap water. They have at least four highchairs (IKEA Antilop without trays). There's a nappy change table in the (unisex) toilet.

Accessibility: A step to get in. Two small and somewhat surprising steps to the toilet.