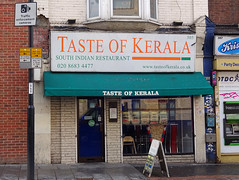 It's quite small, with just eight tables seating a total of 32 (though there's another room on the first floor to seat 25-30 more). Hangings depicting Keralan landscapes and culture brighten up the glossy white tiles of the walls, while tall red and black pleather chairs surround the tables. Flatscreens are mounted by the ceiling, and a fully-stocked bar is squeezed in at the back.

Kake has visited three times now, all on Monday lunchtimes, most recently in June 2018. There were between two and ten other customers in on all my visits, on one occasion including a couple of groups with small children, and the flatscreens were showing some sort of TV drama with music but no dialogue, not too loud.

On my first visit in May 2018 I went for the express meal (£5.50) photo, which came with a huge mound of basmati rice, a small poppadom, pickle, rasam, an omelette, a vegetable dish, a small fried fish, onion salad, and salted yogurt.

The rice was fine, with nicely separate grains. The vegetable dish was cabbage; crisp and coconutty, flecked with whole spices and shreds of carrot for colour. The onion salad was crisp and juicy. The omelette also included onions, along with green chillies. The fish was thoroughly deep-fried to the point where the head and bones were edible, but they'd managed to avoid making it too dry. Overall, there was a good mix of flavours and textures.

On another visit later the same month I had the fish thali (£7), which came with a selection of starters photo before the main event photo. The starters were interesting: a small bowl of thin, hot, slightly sour soup; another of crisp, thin banana chips; and another with nicely softened chickpeas interspersed with juicy red onions and crunchy carrot cubes.

The thali itself was overall less exciting than I'd hoped. One of the dishes was the same cabbage dish I had last time, there were two bowls of yogurt with different seasonings, and the sambar was OK but nothing special. I did like the dal, and wished there had been more. The fish component was the best part of it; well-flavoured mackerel in a rich, savoury sauce, served in a separate dish. I'd been offered a choice of two types of rice, and ended up with Keralan matta rice (red rice), which was a little too starchy and soft for my taste, but I've not had this rice before so perhaps it's meant to be like that. As well as rice there was bread and a poppadom; the poppadom was crisp and fresh, and the bread was nicely thin but perhaps a little on the chewy side.

In June 2018, appam with egg curry (£4 as a meal deal including two appam) photo was a good portion for the price, being slightly more than I could eat. The curry included two halves of hard-boiled egg in a savoury sauce with plenty of chilli heat. The appam were mild in flavour, thin around the edges and thick but properly cooked through in the centre.

Tap water on all visits came swiftly on request, and was topped up from a chilled jug when it ran out.

Kake's verdict: I'd like to explore more of the menu, particularly the fish and seafood dishes.

Accessibility: No steps to get in. The toilets are up a flight of stairs with a sturdy handrail and one bend.