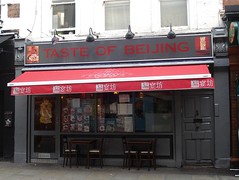 Taste of Beijing was a small restaurant in Soho, specialising in Northern Chinese food. It closed down some time in April or May 2010, less than a year after it first opened. As of May 2010 the windows are papered over and there's no indication of what's happening next.

A restaurant specialising in Northern Chinese food, in Soho.

This is a small space, with a handful of basic canteen style tables set closely together, and the kitchen area to the side. A larger table had been set up near the rear for our group, the tables having been pushed together so that we were seated quite far apart, but this just meant more room for putting down all the food in between us. Staff were very friendly and took time to explain the menu to us, although it probably helped that one of our group had a smattering of Mandarin.

The menu covers a range of Chinese cuisine from across the country, but we tried a few of the house specialities. The best of these was the fish topped with dried chillies and Chinese mushrooms photo, very well spiced and tasty, with fish just coming off the bone easily. The pancake (yi yang fang) photo, a Beijing street food and packed with egg, sesame and coriander, was also pretty decent. On the other hand, regional specialities such as stir-fry shredded potato photo and zhajiangmian noodles photo (served with bean paste, minced pork and shredded cucumbers, intended to be mixed together in the bowl), were more bland and far less interesting.

Probably the best dish overall that we tried was the Sichuan-style fish casserole photo, served in a wok and quite dry (not a hotpot), but with plenty of chilli and Sichuan peppercorns, as well as whole tiger prawns. It had a proper kick and was quite lovely, with enough to satisfy all five of us who made it along (they have a larger size available as well, but we went for the medium).

The other dishes we had on the side — chive, egg & spring onion dumplings photo, and stir-fried gai lan photo — were both perfectly reasonable and nicely flavoured. The only real disappointment was the "sea-spicy aubergine" photo, far more a sweet and sour dish, and not particularly well-executed.