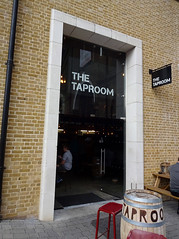 It has a deliberately unfinished style, with quite new-looking bare brickwork, a concrete floor, and a bar front built from planks. Stylised "bare bulb" lighting competes the look. Double height with a mezzanine above the bar and a spiral iron staircase. Tallish backless stools cluster around tables made from barrels, though a rather more comfortable armchair lurks against one wall.

Kake visited on a Saturday afternoon in September 2017. There were a fair few people in when I arrived a little before 4pm, but still plenty of free seats inside, and it actually got noticeably quieter while I was there. Music was playing, not quite too loud for conversation, but getting there.

According to a menu seen in September 2017 photo, food is served 4pm-10pm Mon-Thu, noon-11pm Fri-Sat, and noon-9pm Sun. It's based around pizzas, chicken wings, and bar snack type food.

Buffalo fried courgettes (£4.50) photo were a genius idea — strips of courgette in a flavourful batter, deep-fried and served with a blue cheese dip. They were a touch greasier than ideal, but there were very interesting flavours in the batter; a hint of chilli, and something almost fermented. The batter stuck to the courgettes very well, with hardly any of it falling off. The blue cheese dip had plenty of cheese in it, too.

Accessibility: No steps to get in, or to the bar or toilets, but almost all the interior seating is either on highish stools or up a spiral staircase. No steps to toilets, including an accessible one with nappy change.