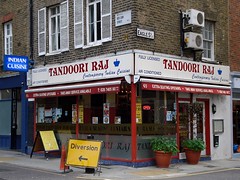 Tandoori Raj was an Indian restaurant in Holborn, located on the corner of Eagle Street and Red Lion Street. It has now closed. As of January 2020 the premises are occupied by a restaurant called Mr Wong's photo.

Indian restaurant in Holborn, located on the corner of Eagle Street and Red Lion Street.

Note: According to a comment on Flickr, as of 2010 the Tandoori Raj is under new management. We haven't visited since the management change, so the comments below may be out of date.

They also offer takeaway, and a daily buffet lunch (£8 as of September 2008). A sign in the window indicates that they serve halal food. There's ground floor seating plus another room upstairs.

Kake and others visited on a Wednesday evening in September 2008. We were a largeish group, so had prebooked space in the upstairs room, which turned out to be fairly plain decor-wise, though not uncomfortable.

The food was all really quite average. Kake's starter of lentil soup was very bland, despite being advertised as "spicy soup made with special herbs". I couldn't detect any flavours other than that of the lentils, and even those were slightly undercooked. My main of king prawn sagwala was better in terms of flavour, with a decent quantity of tasty chopped greens in the sauce, but the king prawns themselves were rubbery and flavourless (and I suspect they may not actually have been king prawns at all).

Kake's verdict: I wouldn't boycott the place if others wanted to come here, but I certainly wouldn't come back on purpose.

Accessibility: At least one step up to get in, and toilets are up two flights of winding, narrow stairs.